New Members Appointed to NSC Board of Directors 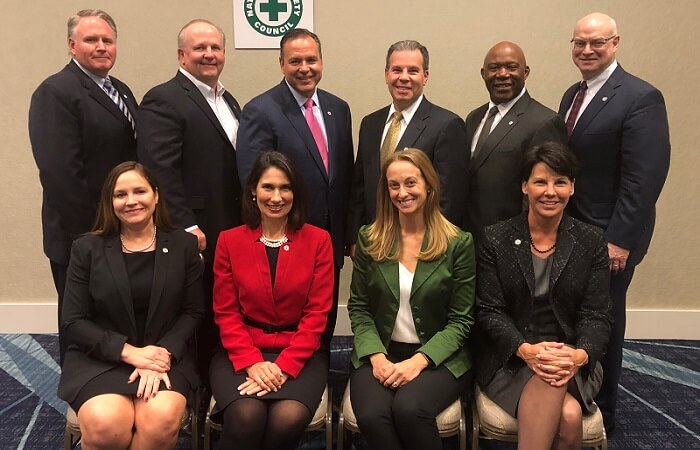 HOUSTON – The National Safety Council welcomed nine new board members Oct. 21 at the Council’s annual board of directors meeting at the NSC Congress &amp; Expo. Mark Vergnano, CEO and president of The Chemours Company, remains as chairman of the board.

The nine new board members voted in are:

“The National Safety Council Board has helped the organization make significant strides toward achieving its mission of eliminating preventable deaths, and we look forward to new individuals contributing to this goal,” Vergnano said. “These men and women bring a wealth of experience to the board, and their knowledge will go a long way toward making our world safer for all.”

Burritt is president and CEO of United States Steel Corporation, which he joined in 2013 as executive vice president and chief financial officer. He was appointed to his current position in 2017, overseeing all business operations in the United States and central Europe. He also serves on the Lockheed Martin Board of Directors.

Dickson is president and CEO of McDermott International Inc. and has held that position since 2013. He oversees the strategic direction of the Houston-based company, which has approximately 40,000 employees operating in more than 54 countries. He also serves on the Greater Houston Partnership Board of Directors.

English has served as vice president of environment, health and safety for The Boeing Co. since 2014 and is responsible for leading its environmental sustainability efforts. This includes reducing the environmental footprint of its global operations, products and services, as well as leading its workplace safety programs. She also serves on the Year Up Board of Directors.

Garner-Janna is executive director of corporate health and safety for Cummins Inc., a position she has held since 2008. She has more than 23 years of experience leading HSE and other related manufacturing functions within Cummins.

Merendino is vice president and general manager of risk control for Liberty Mutual Insurance. He is responsible for leading the risk management consulting operation, implementing an organization-wide approach to eliminate business risk and loss, and developing future leaders.

Scalzo Brown is director of safety, health and environment for AECOM. She has more than 15 years of experience in the environmental, construction, emergency management, transportation and energy industries. She serves as a Division representative on the National Safety Council Board.

Daniels is a safety officer with the Safety Management Division of DeKalb County, Georgia’s Department of Watershed Management. He has worked in local governments across the U.S. since 1981. He is a retired fire chief/emergency manager and now focuses on workplace safety, emergency management and security for one of Georgia’s largest water distribution systems. He serves as a Division representative on the NSC Board.

Hamson has served as president of the Utah Safety Council since 2013. He has more than 25 years of experience working with nonprofit organizations and currently serves on the Safe Kids Utah Board. He serves as a chapter representative on the National Safety Council Board.

More information about the National Safety Board of Directors is available here.