For National Preparedness Month, Learn How to Stop The Bleed - National Safety Council

For National Preparedness Month, Learn How to Stop The Bleed

A school district in Wisconsin goes beyond First Aid to prepare for life threatening emergencies. 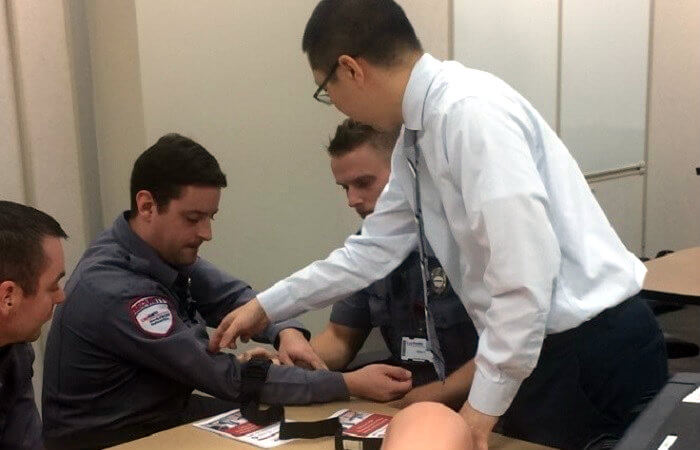 Last fall in Sun Prairie, Wisc., 15 school district health staffers took a University of Wisconsin Bleeding Control course to learn about treating severe bleeding injuries. After mastering the bleeding control techniques, the nurses worked with school district administration to put together bleeding control kits for their schools and spread the news about the availability of the new kits through their school staff newsletters.

A few months later, a student suffered an injury with life-threatening bleeding. One of the health services staff that had taken the Bleeding Control course sprang into action and placed a tourniquet to successfully stop the bleeding, helping save the student’s life. Since then, the school has put on several more Bleeding Control classes and even helped to train 32 local emergency medical services personnel.

Bleeding is the number one cause of preventable death from injury. When people sustain injuries that cause life-threatening bleeding, they can die quickly unless someone can provide immediate care. This can sometimes be quicker than emergency medical providers can respond.

After the tragic events at Sandy Hook Elementary School in 2012, a group of national stakeholders led by the American College of Surgeons came together and identified the need to train the public on how to provide immediate, life-saving care in situations with life-threatening bleeding. These efforts could save lives not only in mass shootings and bombings but also more common work-related injuries, home injuries, and motor vehicle crashes.

We also teach people what to include in a bleeding control kit:

Just about anyone can take the course. This is critical because any one of us can potentially face a situation where these skills can save a life. In addition, all health care providers can learn to teach it. Like the Sun Prairie School District, several work places and public buildings across the country have started to purchase and stock these kits. I carry my own bleeding control kit in case of emergencies.

Trauma centers and other institutions across the country have begun the work of spreading this important program. At the University of Wisconsin, our Level One Trauma Center received grant funding to start a Bleeding Control program as a resource for the region. We started by obtaining supplies and equipment needed for training. We then trained trainers to begin our local grassroots effort.

To get the maximum reach possible, we need to empower our community to spread these knowledge and skills. The UW program has trained over 500 people in the state, including the nurses from Sun Prairie School District. The community engagement has been quite remarkable, as most of these students are now trainers and the public is taking action!

During National Preparedness Month in September, you too can learn how to stop the bleed and save a life. You can find classes online at bleedingcontrol.org or by contacting your local trauma center. Do your part.