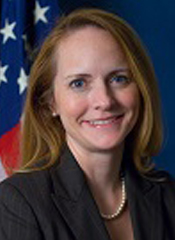 Jane Terry is the vice president of government affairs at the National Safety Council.  An experienced policy and legislative leader, she has more than 20 years of experience working with local, state and federal government officials on transportation, telecommunications, workplace safety, community development and healthcare initiatives.

At NSC, she leads outreach to policymakers at all levels of government to eliminate preventable deaths. Her efforts provided the foundation for the Road to Zero coalition, led to more effective partnerships and implementation of new laws, and more. She is a regularly requested speaker on NSC initiatives such as roadway safety, the opioid epidemic and workplace safety.

Prior to joining the National Safety Council, Jane served as the director of government affairs at the National Transportation Safety Board (NTSB). In this role, she improved transportation nationwide by advocating for NTSB safety recommendations in the areas of aviation, pipeline, rail and highway safety becoming law.

Jane led her own government relations firm in Atlanta, handling transportation and local government policy at the state and federal levels.  Prior to that, she worked in Washington, D.C., on Capitol Hill.

Originally from Austell, Georgia, Jane graduated from the University of North Carolina at Chapel Hill with a degree in political science and economics.