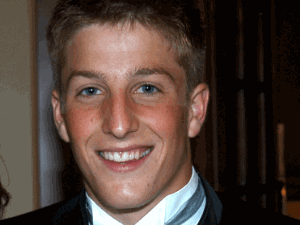 Marianne Angelillo's journey began on Father's Day 2004, when her 17-year-old son, Matthew, was killed as a passenger in a high-speed car crash.

Matthew, a popular honor student and athlete, planned to attend the United States Air Force Academy after graduation, and the academy awarded him an honorary membership in the Class of 2009 in recognition of his great potential. His loss was a devastating blow to the Skaneateles, NY community.

Marianne Angelillo has spoken at school presentations and for traffic safety groups since 2004, hoping that sharing her family's story will spare other families from similar tragedy. Several New York agencies have recognized her efforts. Angelillo also authored a book about her family's experiences, titled "Sharing My Stones.“

"The first time I was approached to speak about Matt's death, I decided that I would share my pain if it could help save another family from experiencing what we had," Angelillo said. "I discovered that in reaching out to teens and their parents, I was able to connect with Matt and use his life to educate others."