Slow down for work zone safety. 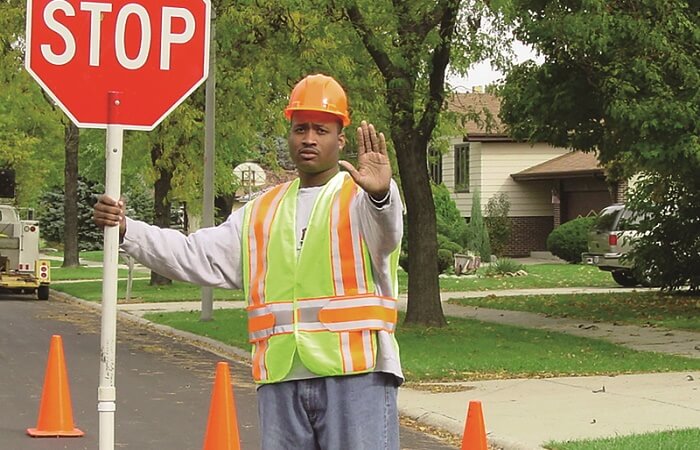 It never fails: You’re running late and now you see signs, barrels and an array of workers you are sure are there only to inconvenience you. Now, because of this person holding a sign that says “stop,” you are certainly going to be late!

After what feels like an eternity, the person finally turns the sign to “SLOW.” You don’t have time for “slow,” so you speed away in an attempt to make up time. Moments later you regain consciousness and find yourself tangled in a mass of metal.

You have just become a statistic. You have become one of the 45,400 people in the nation injured in a work zone vehicle incident in 2018. You have contributed to one of the over 95,000 work zone incidents that occur yearly, according to the Federal Highway Administration. To make matters worse, when your car went out of control and hit a worker behind the barrier, you caused one of the 755 work zone deaths.

While the scenario may be made up, the numbers are fact. In 2018, 124 workers were killed in work zone incidents. Each fatality, as well as each of the 45,400 injuries, could have been prevented.

The numbers for 2019 may be even higher. Preliminary estimates show that while roads have been generally emptier for the last few months due to the pandemic, motor vehicle fatality rates have significantly increased. This means people are taking more risks behind the wheel than they generally would, including speeding.

A 2019 nationwide survey on highway work zone safetyconducted by the Associated General Contractors of America found 67% of highway contractors reported intrusions. Every intrusion by a non-contractor motorist has the potential to cause injuries or deaths – sometimes both.

While we use the roads to get to where we need to go, for many others, the roadway is their workplace. Even in our fast-paced world, slow down, pay attention and make it through the work zones safe and alive, and allow those working there to do the same.