Differential Impact of the Pandemic Across Workforce Sectors

Worker health, safety and mortality have always been distributed unevenly across occupations, and the risk of COVID-19 transmission is no exception. While certain occupations and job roles remain at higher risk of workplace injury due to ever-present occupational hazards (e.g., fishing and hunting, logging, working at heights), the differential impact of the pandemic across occupations has minimal overlap and distinct differences in the occupational factors that predict risk exposure for workers.

In this Data Dashboard post, we explore the relationship between COVID-19 risk and job functions, work environments, occupations and industries. 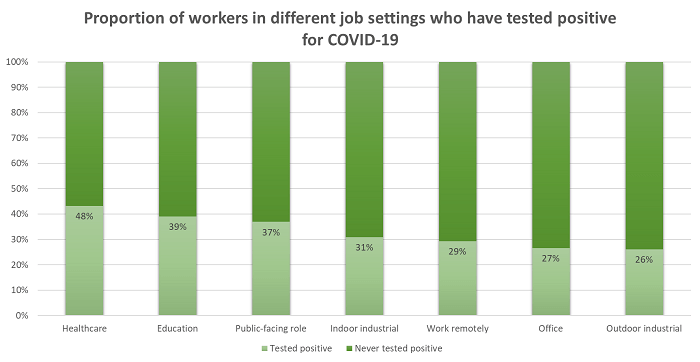 The latest SAFER Trends Indicator Survey reached 1,007 U.S. workers across all demographic and occupational groups. We asked respondents whether they have been tested for COVID-19 at work or elsewhere, whether they had ever tested positive, and if so, how likely they were to have tested positive due to workplace exposure to the virus. As expected, those who work in in-person healthcare settings were most likely to have tested positive for COVID-19 (48%), but there was also a wide gap in testing frequency between people who worked in higher and lower risk work environments.

People who work in healthcare were slightly more likely to have been tested at all (88%), and to have taken a test at work (54%) or another healthcare facility (68%). In contrast, among industrial and skilled trade professions, testing was slightly less common overall and much less common at work. In construction for example, while 82% of workers reported having taken a COVID-19 test, only 35% of all construction workers had ever been tested at work. The percentage of construction workers who received tests at work was higher for union members, a trend which we saw across other industries as well. Of union members, 38% reported having tested at work compared to only 22% of non-union workers.

While the frequency of testing may be correlated with lower workplace transmission (i.e., cases are caught quickly and sick workers are able to quarantine), the abundance of testing in specific fields, while contributing to a more accurate estimate of actual cases, may make case rates in industry sectors where testing was uncommon look misleadingly low by comparison. Because self-reported case rates across occupations were lower than the actual population-wide case rates estimated by seroprevalence data, actual case rates may be higher across all industries, but especially those in which workplace testing was rare.

Another way of assessing possible workplace transmission risk across industries is asking how likely someone who had tested positive for COVID-19 in the past believed they had caught COVID-19 on the job. While this is an imperfect measure and is based on subjective opinions and memory recall by the participants, it does give us a sense of how safe workers felt about their risk of workplace transmission. Cases of workplace transmission can be difficult to verify and are likely underreported, but individuals who were infected can have a good sense of where they were exposed to the virus based on their recently activities, and if and when other people in their lives tested positive around the same time.

As the graph (right) indicates, people who work in public-facing roles who caught COVID-19 were most likely to report they believe they caught it while working, followed by healthcare workers. 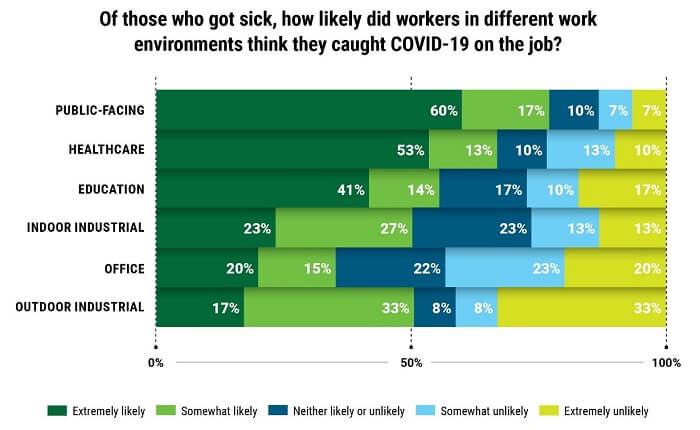 The majority of educators also reported they were extremely or somewhat likely to have gotten sick at work. In open-ended responses, many educators cited working with children who were unable to be vaccinated yet as a contributing factor to their workplace COVID-19 risk.

The perceived likelihood is lower for those who work in indoor industrial settings, but lower still for those who work in offices or outdoor industrial settings. In general, indoor industrial work is more likely than office work to involve shared machinery and workspaces, full-time in-person work arrangements, and movement of workers around the facility, all of which contribute to a higher risk of close contact between workers. By comparison, office workers often reported there were very few people in their office on any given day due to hybrid schedules, that every office worker has their own separate workspace away from others, and high compliance with masking policies, all of which contributed to their feelings about workplace COVID-19 safety.

While workers in outdoor industrial settings may face the lowest baseline risk of airborne transmission on the job, their workdays often aren’t entirely free of close contact, such as in shared break areas, vehicles, an office headquarters, or during training. These workers were most likely to report they were extremely unlikely to have caught COVID-19 on the job, but were also most likely to respond “somewhat likely,” which indicates that the cause of transmission wasn’t absolutely clear. This could be due in part to the infrequency of workplace testing in industries with open worksites, and thus more uncertainty about where and to whom workers might have been exposed.

Job Role: Managers, Supervisors Tend to Feel Safer than People who Report to Them

By job role, people in executive and managerial roles reported feeling safer at work than those in non-managerial roles. For example, 88% of chief executives polled felt “very safe” from COVID-19 at work, and managers across all industries were most likely to feel “very safe1,” with the exception of food service and medical and health services managers, most of whom felt “somewhat safe.2”

By contrast, in non-managerial roles, 31% of teachers3, 26% of retail cashiers and salespeople4, and 26% of frontline nurses5 reported feeling somewhat or very unsafe, more so than the people in supervisory roles over these positions. In general, non-managers reported more frequent interaction with others and close contact being primary contributing factors to their assessment of COVID-19 risk at work.

Healthcare workers who work in close proximity to patients are generally at higher risk of workplace infectious disease transmission, but the pandemic has brought many of them into close contact with an unprecedented number of contagious individuals. The same can be said of people in public-facing roles, where workplaces that were once relatively safe have become a significant risk to workers every day on the job.

Data was collected July 18-21, 2022. The survey was distributed through a nationwide market research firm, and the sample was demographically representative of the U.S. workforce, but with a slightly higher proportion of Hispanic respondents.

Percentage of Workers by Employer Category