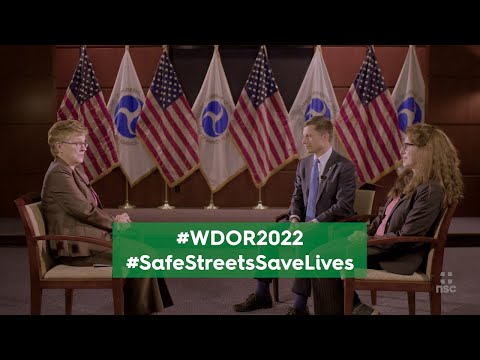 WASHINGTON – National Safety Council President and CEO Lorraine Martin, U.S. Transportation Secretary Pete Buttigieg and Co-founder of Families for Safe Streets Amy Cohen gathered to discuss mobility safety in America and what must be done across public and private sectors to put safety first and save lives ahead of World Day of Remembrance on Sunday, Nov. 20.

The World Day of Remembrance for Road Traffic Victims is a global commemoration for the millions who have been killed and seriously injured on the world’s roads and acknowledges the suffering of all affected victims, families and communities. In the United States, local advocates, safety organizations, community leaders, elected officials and others are joining together to call for safer streets and prevent these tragedies while honoring the tens of thousands who are killed by traffic violence in our country each year.

“It is unacceptable that as a nation, we are burying over 40,000 children, brothers, sisters, mothers, loved ones [each year] and devastating their communities,” Cohen, whose son was killed by a car in a preventable incident while walking to soccer practice in 2013, said in the chat. “Day in and day out, year after year, it can and it must stop.”

In the United States, one of the most developed countries in the world, more than 46,000 people lost their lives in a preventable traffic crash in 2021 and more than 21,000 in the first six months of 2022, according to NSC analysis. Furthermore, recently released NSC estimates show 518 people may die on our roads over the Thanksgiving holiday alone. If the estimate holds true, Thanksgiving 2022 will be the deadliest since 2007. These figures not only show that the U.S. continues to fall behind its international counterparts when it comes to mobility safety, but the data also indicate the American road to zero traffic deaths is long, but one that must be taken to save lives.

“It starts with naming our goals and then looking at how we get there,” Buttigieg said in the chat. “Zero has been achieved, not at a major, national level, but in big cities, including abroad, cities with more than half a million people, and in American cities of more than 10,000 people. What I want to do is add to the list of places that have achieved it and keep that going.”

In observance of World Day of Remembrance, communities across the U.S. are organizing events to urge change at the local and state levels. Events include rallies, bike rides and visual memorials, as well as a national virtual candle lighting ceremony for those who have lost a loved one in a traffic crash or suffered a serious injury. NSC invites social media users to use hashtags #WDoR2022 and #SafeStreetsSaveLives to participate in conversations on this observance Sunday, Nov. 20. More resources can be found here.

About National Safety Council
The National Safety Council is America’s leading nonprofit safety advocate – and has been for more than 100 years. As a mission-based organization, we work to eliminate the leading causes of preventable death and injury, focusing our efforts on the workplace, roadway and impairment. We create a culture of safety to not only keep people safer at work, but also beyond the workplace so they can live their fullest lives.