Collision mitigation promises to save lives and dollars for fleet owners and operators. 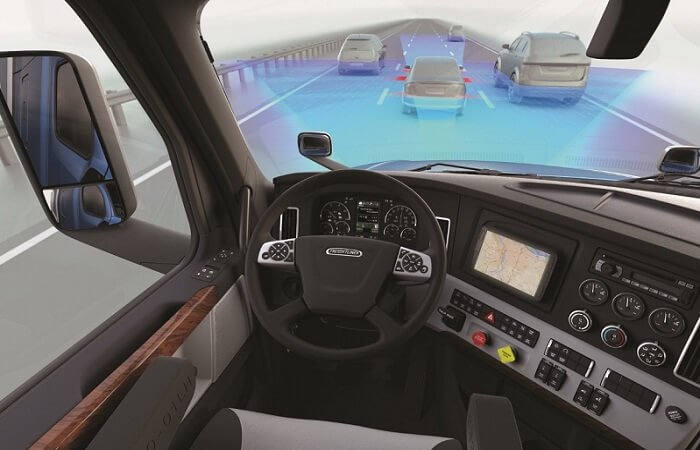 When dragsters roll into town, spectators fill the stadium at Race 66 Raceway in Joliet, IL. The thrill of pedal-to-the-metal acceleration and the sound of engines roaring is part of a sensory overload during any National Hot Rod Association event.

My experience riding in a semi on a service lane adjacent to the actual quarter-mile dragstrip was all about demonstrating collision mitigation technology, not smashing the track speed record of 334.73 mph.

I was an invited guest of safety advocates and truck manufacturer sales reps for the demo of new collision mitigation technology.

Some systems work like this: Radar sensors detect what is in the driving environment and cameras help identify objects. Others use multiple radar beams and advanced software. Either way, think of it as two heads working as one to provide drivers more information, earlier alerts and allow for emergency intervention. Yes, the future of transportation safety has arrived. I don’t mind saying that thought has me a little on edge. Am I ready? What if the technology fails?

Our driver, Fred Andersky explains what to expect, then takes us for a ride down the straightaway. We reach modest speeds of between 30 and 35 mph as we pull up on a slow-moving pickup from behind. At that point, an alarm sounds inside the cab.

As we draw even closer, the alarm sound gets louder, and I gain a greater appreciation for why these multi-faceted systems are referred to as driver assistance technologies, not driver replacement technologies. The warnings are meant to engage and support the driver. As Andersky says, “Safe driving practices, comprehensive driver training and safe and alert drivers are still important in delivering the full safety equation.”

An instant later, we turn the corner and move toward a parked pickup. Fred turns full control over to the truck’s automated emergency braking system. When we stop short of a rear-end collision, someone exclaims, “See, it works!” I’m not sure if it’s because of genuine excitement or flat-out relief.

I’ve always been the type that learns best by doing. I think commercial and fleet truck owners and drivers could benefit from taking this kind of technology for a test ride. Research points to the game-changing potential of advanced driver assistance systems, which, while not yet government-mandated in commercial trucks, are becoming standard in new truck series.

As software advances and these systems become more accurate at detecting vehicles, manufacturers are increasing braking power from 30% to 50% of the trucks braking capability to 100% – which reduces stopping distance and improves odds of avoiding a crash. Enhanced stability control and ABS braking help enable this increased brake force.

In big rigs, the ability to brake based on a non-metallic object (pedestrian) is the next horizon. Testing is under way in a limited release program.

For now, know this: Video-based onboard monitoring systems in trucks can prevent as many as 63,000 crashes annually, according to the AAA Foundation for Traffic Safety. Schneider National won a Green Cross for Safety Excellence Award this year for its company-wide implementation of collision mitigation technology.

“(Fleet owners are) in business with pretty thin margins, so the technology has to deliver,” Andersky said. “And we’re seeing that with these collision mitigation technologies, even more so than what we saw when (electronic) stability came out.”

The end result? Lives will be saved, injuries will be reduced and property damage will be minimized. In turn, operating expenses will go down. That’s a great return on investment all fleet owners can get excited about.

Watch for yourself: How collision mitigation systems work in big rigs.

Ron Kremer is a writer with National Safety Council and member of the National Child Passenger Safety Board.